I consider this two days PTSOA, or post- The Song of Achilles, which has made living my real life difficult in its wake. The only way it could possibly be improved is if it were some sort of… Very historically inaccurate lesbian re-imagining. That would truly knock my socks off.

As it is, I think it’s the best love story ever written, and I’m sad,

And this is my blog now. So! I think the title explains it all.

5. Briseis mourns Patroclus in the tent of Achilles by Jean Alaux

Achilles looks golden. He is filled with determination, with caustic rage, raising a short sword (dagger?) in the air. Briseis is allowed to weep and cling, but Achilles has to be strong. He isn’t looking at the body. The only hint of softness about him is in his hand, placed over his beloved’s. This is about as gay as sleeping over at your friend’s house, but one of you takes the couch. 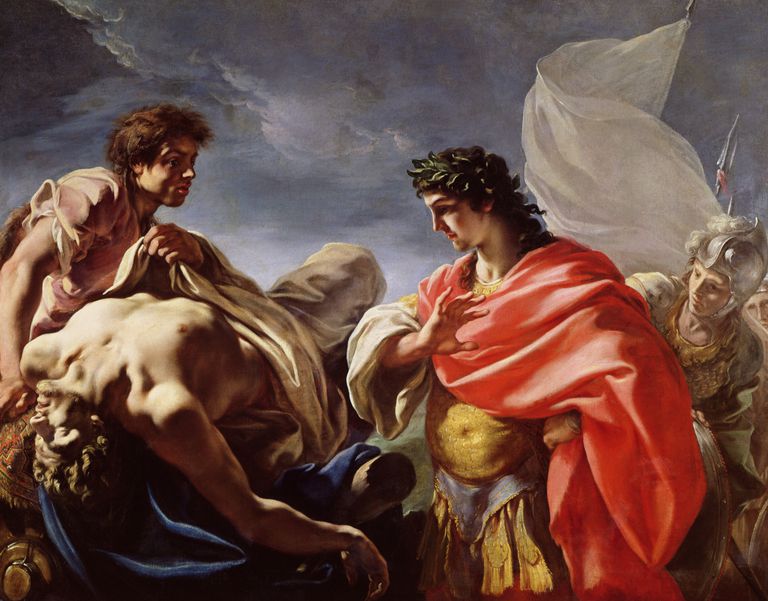 4. Achilles Contemplating The Body of Patroclus by Giovanni Antonio Pellegrini.

What can I say about this one? The chiaroscuro on Pat’s face is haunting. The surprised renaissance hand is there, delicately expressive where Achilles’ face shows almost nothing. He looks nearly dead himself. I’m sad again. Half his soul is gone. What’s left but vengeance? About as gay as throwing your legs over your pal’s lap when you sit down to watch some heterosexual sh*t like Pretty Woman. 3. Achilles Lamenting the Death of Patroclus by Gavin Hamilton

Finally, a painting where Achilles gets to actually look sad! Patroclus’ sheet-white corpse draws focus to the swirling center of this masterful painting, but that’s all BS. What of our feelings? Achilles is in agony and so am I. You could look at this painting and think, “Hey, that blond dude must have really cared about Mr. Rigor Mortis over there.” This one’s as gay as holding hands in that way where your fingers interlace. 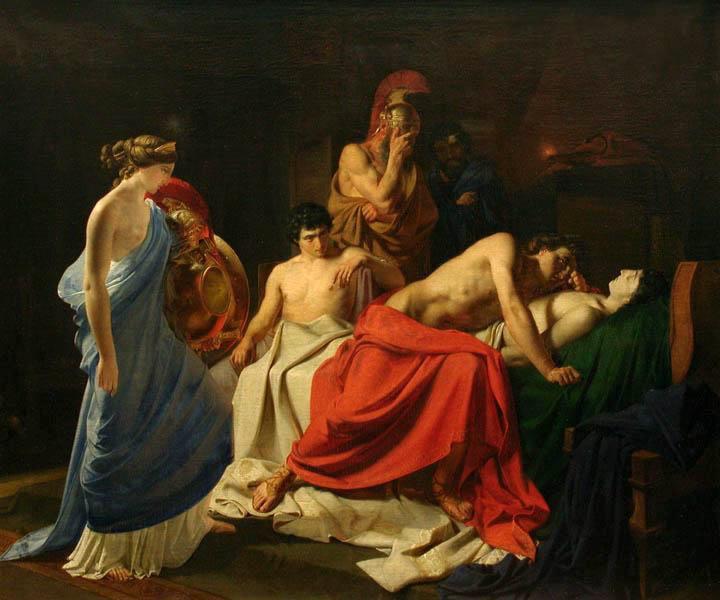 2. Achilles and the Body of Patroclus by Nikolai Ge

In the same vein as the others, but a more intimate position. Kinda weird to hug a corpse IMO, but I can’t judge. They’re ancient greeks! It’s almost hidden in the shadows but you can clearly see Achilles wiping away tears, lying over Patroclus like he was clearly comfortable doing in life. His eyes are on Patroclus’s face, his expression one of longing: I would give anything to have him again. Just for a second, could he open his eyes and look at me? Best of the Greeks. My Patroclus. My philtatos. Most beloved. Dear Lord, I’m making myself sad again. This one’s as gay as makin’ out. 1. Achilles Displaying the Body of Hector at The Feet of Patroclus by Jean Joseph Taillason

This is a powerful image. I’m shaking– perhaps from the sheer emotion of this painting, perhaps from sleep deprivation. Who’s to say? Now, not a lot of touchy-feely stuff here, because Pat’s corpse is not fresh and it’s probably starting to smell too rank for any quality weeping to occur. But let’s check out the imagery: super dead body of super dead boyfriend, swaddled in blankets on a big fancy platform bed. (Uh. We all grieve in our own ways.) Then there’s Hector, the guy who killed Pat, just junked onto the floor like dirty laundry. Everyone’s crying in the background but Achilles is pointing, dynamic– he’s half mad at this point, or fully mad, wracked with grief.

“Look, there he is!” Achilles looks like he wants Patroclus to sit up, go “Oh, you killed Hector, great! I’m not dead anymore. Let’s go eat off gold plates or whatever.” There is no comparison to make here. This painting is as gay as revenge-slaughtering the man who killed the love of your life, and dumping his body at your dead beloved’s feet. But if I had to estimate? As gay as holding your beloved all night long, adoring the way they breathe slow and calm as you drift off into peaceful sleep.

Want more of the homosexual agenda? Make sure follow me and subscribe to my mailing list, because that’s one of the stories in my upcoming book, Advice I Ignored! (Fortunately, though, my first gay crush did not end in anybody getting a spear through the chest.)